The Post-Disposed European Tour big Thank you everybody!!! 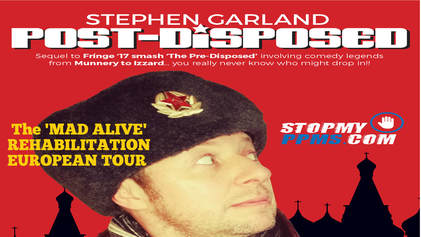 I finally find time to acknowledge and thank all those people that directly supported me post all the fundraising but during the treatment and the amazing year that has just passed…
The only important news is my health has seen stunning improvement since I was released from 30 days in a Moscow Hospital and the amazing beautiful positive Pirogov staff in the early hours of 2017’s Winter Solstice for a most apt ‘Celtic Rebirth’ that was poignant before, but now for me is a date that I am to be indelibly spiritually connected more than ever.
The mighty Kíla were such a part of the story from the time of the ART DISRUPTORS live in GRAND SOCIAL gig in my fundraising but also their music played a great part in my hazy ISO days… they played a gig on that Solstice night in the Sugar Club in Dublin and while obviously I couldn’t be there I asked Colm to give me a request for my favourite track ‘Glanfaidh Me’ as I would be attending in spirit…
​Kila’s friendship, integrity, connection and support was massive… and I will never forget… as the weeks of ‘lockdown’ passed and the mad narrative surrounding me just kept developing with ‘Beasts from the East’, Ireland’s battles with ‘peak flu’ and other constant crisis but my strength steadily grew and as the Edinburgh Fringe deadlines approached, the confidence or need to placate the addiction to create a follow-up to my 2016 effort the ‘Pre-Disposed’ grew strong! 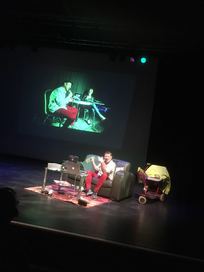 Onstage at Backstage
Deadlines meant I would have to get my act together to pull a sequel show together and so applications were made, venues secured for a week run and planning/writing began in earnest and the latest show the Post-Disposed was born. It would get a full Edinburgh preview in the yet again aptly titled ‘Cruthú’ (meaning Creation) Longford’s Celtic Arts Festival on July 25 this year.
​And here the need for thanks and acknowledgements really kick in…
to Oliver Durkin (IRE)  and Andre Bogdan (ROM) from Guerrillascope Ireland who would throw their production weight behind the show from the off!
To the brilliant, selfless committee behind Cruthú, to the wonderful Backstage staff from Mona to all the production, David, Louise and Willow Traders for lending me with my set and everyone who had faith and came and supported a show with no background or form really and would ultimately go on way too long… but that is why ‘previews’ exist and are absolutely required!
So, very grateful for everyone for helping to get the ball rolling.
I had seen enough there to know I had a decent stage show and with the experience I have gained over the years I felt like after a full week in Edinburgh it would take shape… So why not take it ‘on tour’ after? 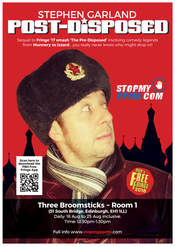 Fringe Flyer
Edinburgh is an unforgiving city and performing a show everyday for a week is quite a daunting task for anyone in full health, so without the help of fellow performers Kieran and Shell Butler (AUS) who got me through the logistics of putting the show on everyday, I would never have managed. Also Ollie and Andre who arrived like a calvary to further pick up the strain and we made it through the week run while all the time getting a handle on the show what worked and where to tweak the performance.
I had figured that this was how things might work out so I had gone ahead with putting in place the necessaries for a European Tour health permitting, to begin with just 3 days break at home before hitting the road again. On the surface it would seem stupid, Valeska was concerned but I figured if the body would allow me let’s take it as far as it could go…
I was still walking with a stick and would be a long way from my mobility scooter for those ‘long journeys’… I still have a level of disability and so the ‘Mad Alive’ Rehabilitation European tour as I was now calling it could only have happened with the help of so many great friends. 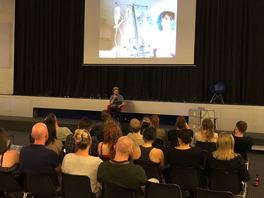 Mercedez CAC Maastricht
I am just going to mention some and particularly my ‘hosts’ who opened their lives and homes to an unorthodox guest, gratitude for everyone who supported along the way will not be forgotten…
First up was London Bira (BRA) and Ceci (URU) friends from Natal now living in Sth Wimbledon who gave me close access to the Northern Line and some great stimulating company as always for a few days for me to deliver a most memorable gig in the legendary Bill Murray comedy club in Islington.
From London I got the Eurostar to the next stop Ghent and friends Declan (IRE) and Anna (NL) Lynch  for a gig Declan had arranged in a really cool brewery (it’s Belgium!). Couple of days there with this wonderful family before we headed to Maastricht a city I used to live in the late 90’s and still have some dear friends from those days in Rachel Schrijnemaekers (NL) and Tony Bass (IRE) the current European Co. board chairman who I have known from my GAA involvement. Rachel is a manager of the Mercedez call centre and had made it possible to have a gig in their amazing auditorium of the actual call centre… it meant a really international largely millennial audience and was further encouragement to see the show connect really well with this demographic… 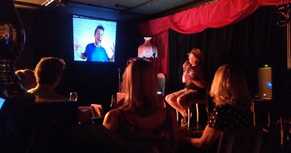 The very cool Agrado Cabaret
Next I had a connection to Girona which gave me the chance to drop in on the wonderful Chapman family (SCO) at their amazing guesthouse Casa dos Torres in beautiful Palafrugell on the Costa Brava(stay here!!) to see the new arrival Jackson, son of an infamous longtime  friend Lex.
Lex drove us down to Barcelona the next day where I hooked up with my BCN surrogate family Michael (CAT) and Charlotte (FR) who had looked after me through the darker days of endless hospital visits and diagnosis… I treat Barcelona as something of a hometown where I am blessed with so many great friends many of whom came out for a cracking gig in the spiritual home of my comedy biz in Spain, Café Teatre Llantiol managed by great friend Yuri Mykhaylychenko (RUS). Yuri a brilliant musician, his track ‘Confession of an Emigrant’ would become the soundtrack of the show!!
The final gig would be in Madrid delivered with the help of Jorge Segura (ES) another of my most solid friends and fellow fighter in all things comedy production who allowed me to take one of his Madrid Comedy Club nights in the so cool venue that is Agrado Cabaret. 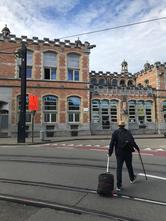 The tour continues!
There was no ‘best gig’, they were all so different but I would also say there was no bad gig somehow the shows reflected the different personalities of the countries, cities and characters of the  friends who assisted as is the nature of live performance of what was a pretty unique tour!
On returning to Ireland I felt very proud of the show, knew it could still be developed more and made better and I have by now already applied to take part in different Fringe festivals around the world. A World Tour is imminent LOL!!!
​
But I was most proud of the  strength of the wonderful, warm and very real multinational friendships that I managed to reconnect with. There are so many others not mentioned here who offered me help and assistance and coupled with other experiences over the last 12 months has given what I have been doing a real sense of purpose and I hope you will excuse my ‘You know who you are’ bundling but I love yis all!!

On the cusp of another New Year I am planning my 2019 with greater belief and confidence knowing that while I never set out to be Mr PPMS or Captain HSCT… by never accepting ‘No Treatment, No Cure’ and only literally having chanced upon this Stem Cell option and had the belief to not listen to a lot of the naysayer doctors and trust my own instincts and research and try something... and a year later I can declare that it has been a life changing treatment!

You can be ‘too far gone’ to do this and people should know that MS is a really shitty, largely hidden disease that takes people in their prime completely without warning and if let progress to its natural end, it really isn’t pretty for the sufferer and all those closest!
There will be more from the Post Disposed and it will all transpire across this platform…

THE REVIEW PAGE IS STILL LIVE AND ACCEPTING REVIEWS IF YOU CAN REMEMBER AND WISH TO SHARE YOUR THOUGHTS!! CLICK HERE