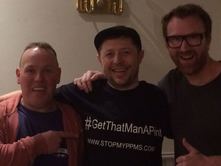 Well that was a hell of a comedy show the young up and coming star from Granard set the tone, but Willa White showed yet again why everyone in the hall believes that this is a comedy star in waiting and Jason Byrne just did exactly what it is that has made him the biggest selling live act of all time at the ultra competitive comedy Mecca that is the Edinburgh Fringe.
It was an awesome comedy show and thank to everyone who came and helped raise €4129 for the StopmyPPMS fund

SPECIAL MENTION: to all the ticket sellers the official avenues Petit's Supermarket, John V's Bar, Fay's Place and those people like Margaret Smith who brought a big group of friends, and Tina from the Spanish Speaking Group, the Night Sponsors,  the people who sold the raffle tickets on the night and to RapidPrint for their super help and contribution on the printing front, to Grey Wizard and Longford recycling for the dramatic roadside poster thanks to everyone who spread the word and helped to make such a great atmosphere!! Hope you enjoyed it!
PHYSICAL OUTLETS: We will also have tickets physically available for purchase at the venue Longford Arms Hotel, Main St., Longford and in Petit's supermarket on Main St., Granard  No booking fee!!
He returned 2 or 3 times over the years, with sensational shows so it is incredibly humbling for me that the man who is the biggest selling show in the history of the Edinburgh Fringe.
From which he will arrive match fit to blow the Longford Arms away.
When I brought my illness to his attention in a Whatsapp, he responded immediately with...

"Ah bollix to that news Steve. I'll help u any way I can, no fee at all, don't be putting me up anywhere if it costs money.
Stay in touch and I'll gig whenever u want, n ask others to help if they don't answer.
Take care man. Jay byrne. Ps those Spanish gigs are only full of great memories"

That is truly a mark of the man and he will be the ultimate headliner for an unmissable night of comedy in longford. 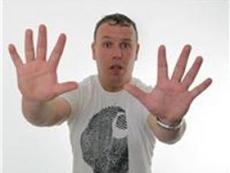 Gimme the ball!!!
WILLA WHITE got into comedy in 2005, through the Irish TV programme Joy In The Hood, in which comedian Des Bishop ran stand-up workshops in some of the most impoverished areas of Ireland, including the Ballymun area of Dublin, where White is from.
White is making his mark on the Irish comedy scene with his gritty no punches pulled streetwise brand of comedy.
A longford crowd in Granard totally warmed to him and I had so many requests to make him part of the night!! 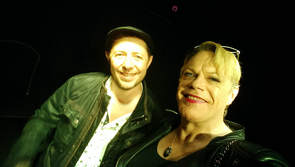 The Pre-Disposed Finale!!!
To counter all these dubs, especially on what might be the eve of yet another POSSIBLE Dublin appearance in an All Ireland Final, I STEPHEN GARLAND, will step up with an excerpt from my Storytelling Show The Pre-Disposed that rocked Edinburgh in the last few weeks and wowed the likes of Eddie Izzard!!!
well we'll do our best but will certainly add some local flavour to keep the Dubs in check in these proceedings.
I will be taking the most Longford excerpt from the story and it will certainly add a local flavour!

I have created many great comedy shows over the years all over the world and I am certain that this will be an absolute cracker and will go a long way to getting me closer to my campaign goal and I hope y'all can come out and have an awesome night!!
There will of course be the customary raffle for amazing prizes on the night and anyone who wants to sponsor some prizes for inclusion then we will certainly do our best to promote and bring attention to your brand... please get in touch to stopmyppms@gmail.com