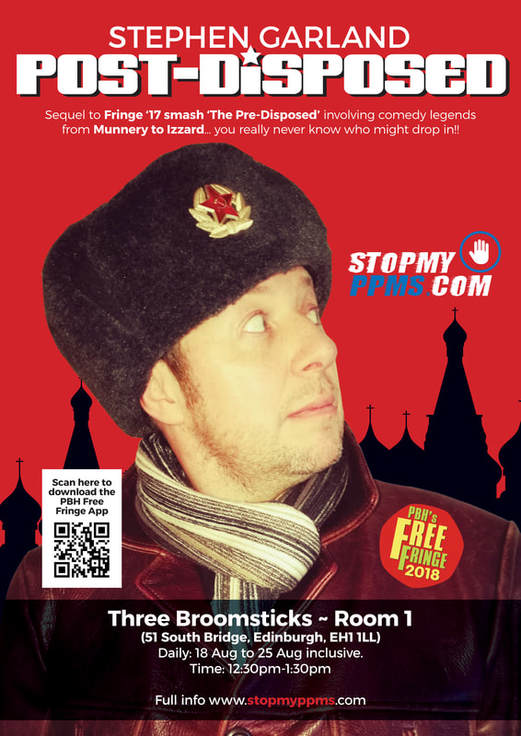 So we're going back to comedy's Mecca with the follow-up to last year's Pre-Disposed that worked so well.

Delighted to be back with the PBH's FREE FRINGE and hope to hook up with the great people who keep one of the best part of the Fringe going each year and all unpaid.
International comedy producer and promoter Stephen Garland, returns to the Fringe with The ‘Post-Disposed’, his sequel/conclusion to his well-received 2017 Show ‘The Pre-Disposed’.

The ‘Post-Disposed’ is another hour of comedy storytelling that frames the long trip from North East Brazil, via Rio, Madrid, Barcelona, Edinburgh, Longford to finally reach Moscow and the non FDA approved treatment that offered the only hope for his ‘No Treatment No Cure’ diagnosis.

It took some time to get this diagnosis of Primary Progressive MS (Multiple Sclerosis) that was evidently taking hold as Garland moved through the typical stages of increasing disability... with first a walking stick, to mobility scooter… with a wheelchair and cognitive collapse the next stop unless a renowned Russian Doctor and his HSCT Stem Cell therapy could stop the ‘progress’.

9 months post Stem Cell transplant, this audio-visual comic retelling of a story framing the positive attitude that made light of adversity and with a background that allowed him to find the funny in that situation.

The Post-Disposed is a show that promises to enlighten and inspire as much as it will entertain.

It may even shed light on #WhatHaveTheRussiansEverDoneForUs

The show has stormed in preview with a special review Facebook Page here: https://www.facebook.com/pg/postdisposed/reviews/?ref=page_internal

PRESS:
'Post-Disposed travels 18 months from Longford, to Spain to Brazil to Scotland to Broadsheet to Russia and back to Longford again; I was Post-Exam Hall exhausted yet didn’t stop smiling, seriously, for 120 minutes. It was the easiest standing ovation I ever ended up in.' - The Broadsheet.ie
Full review here https://www.broadsheet.ie/author/vanessa-foran/

About Stephen Garland:
Garland has been responsible for most things involving professional English language comedy in Spain since 2004, and introduced to the Peninsula the very best from the British comedy circuit, everyone from Munnery to Izzard both of whom amongst others joined his Pre-Disposed show last year.

The Walk-On is dead, All Hail the Drive-On!