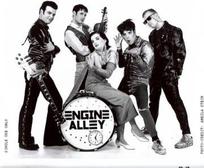 Big Thank you to everyone who came along  to Boscos Cafe last Sunday for what was a  VERY badly needed preview of my Edinburgh Show and thank you so much to local legendary ENGINE ALLEY frontman Canice Kenealy who puntuated the storytelling with some of the finest and most powerful poetry that I have encountered in some time...
Ireland has herself undoubtedly another brilliant performance poet!!
And the Get Garland to Russia fund was €110 better off for the whole exertions...

Thank You, Thank you all once again....

THE PRE-DISPOSED - THE EDINBURGH FRINGE PREVIEW 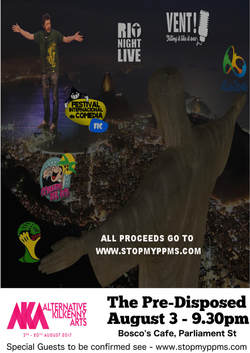 WHERE: Bosco's  Cafe,
Parliament St. Kilkenny
WHEN: August 3 2017
PRICE: FREE... but there will be a bucket afterwards and you can contribute and help with the costs for the show to go to Edinburgh

'The Pre-Disposed' will be a Live Storytelling Show that will go to the Edinburgh Fringe '17 as part of the PBH's Free Fringe.
​
The show will be 3 x 10 min segments punctuated by a some classic audiovisual supporting clips which together will frame the story of a search for a diagnosis through comedy festivals in Barcelona and Madrid, Brazil's 2 Mega Events (World Cup & Olympics), Rio's only English language Night out, Rio Night Live and other comedy projects that involved the very biggest names in the comedy industry from Dylan Moran to Eddie Izzard.

In Edinburgh I will be inviting some of the comedians that punctuate the story to join me for a face to face 'podcast style' shooting of the shit under the theme of the Show title which came about as a correction by a Psychologist that it is politically incorrect to refer to PPMS, despite it's 'No Treatment, No Cure' reality as a 'Terminal Disease' :)
which I had done and was informed that I should use the more PC term, a Pre-Disposed illness!
In Kilkenny the show will have the support of several well known Irish artists and together it will make for an unmissable night of unique entertainment in Kilkenny.
The event will be free followed by a bucket with all proceeds going to www.stopmyppms.com
COME GET THE AUGUST BANK HOLIDAY WEEKEND OFF TO A CRACKER!!!